Functional gastrointestinal (GI) symptoms are common disorders that are persistent, recurring, and often occur simultaneously but have no identifiable cause. Some of these symptoms are abdominal pain, dysphagia (or swallowing difficulties), dyspepsia, diarrhea, constipation, and bloating.

People usually try to treat the symptoms themselves with over-the-counter or homeopathic remedies. Still, no known treatment has been proven safe and effective over the long term.

Functional GI symptoms are often linked with disturbed intestinal transit that lengthens the time for food to travel through the intestines until it is excreted. This abnormality may lead to gallstones and cancers of the breast and colon. There is a need to find safe, effective, easily accessible, and sustainable treatments. Probiotics may be a potential alternative that can be given as a food supplement. It showed promise in improving GI symptoms and reducing whole gut transit time (WGTT). However, the benefit of probiotic supplementation is dependent mainly on the kind of strain; therefore, clinical trials are essential to confirm the safety and efficacy of individual strains.

Bifidobacterium lactis (B. lactis) HN019 is a probiotic that has been shown to have many health benefits, including boosting the immune system and changing the intestinal microflora.

A triple-blind, randomized, placebo-controlled trial was conducted to determine if this probiotic could also shorten the travel time of food until it is excreted and reduce the number of functional GI symptoms in adults.

The Study Method on Probiotics for Functional Gastrointestinal Symptoms

After stratifying by age (25 to 50 years and 51 to 65 years) and gender, the subjects with functional GI symptoms were randomized to consume a proprietary probiotic strain, B. lactis HN019,  daily with breakfast for 14 days. They would mix the contents of the capsule with probiotics-free yogurt. Of the 88 who completed the study, 33 were given a high dose of 17.2 billion colony-forming units (CFU), 26 took a low dose of 1.8 billion CFU, while the rest received a placebo of rice maltodextrin.

There is a one-week run-in period before the start of the intervention. During that time,  subjects were asked to avoid laxatives, dietary fiber supplements, probiotics, and any other products that might affect WGTT. On the second day of the run-in period and again on day 8, subjects would consume 24 radiopaque markers per day for six days in preparation for the abdominal x-ray that would be done on days 0 and 14.

The primary outcome is the WGTT based on the X-ray. To determine diet consistency, subjects would complete a 17-category food frequency questionnaire on days 0 and 14 regarding their food intake over the past week. Each category would be self-rated on a 5-point Likert scale.

The secondary outcome is the frequency of the functional GI symptom using the numeric scale of 1 for “never” and 100 for “always”. This data was recorded before and after supplementation, as reported by the subject. A questionnaire would again be filled out on study days 0 and 14 to evaluate the frequency of nine upper (abdominal pain, nausea, vomiting, regurgitation, and gurgling) and lower (constipation, diarrhea, irregular bowel movements, and flatulence) GI symptoms experienced over the previous week. Adverse events were also asked, regardless of the relationship with the administered study product.

Decreases in average WGTT (33% for high dose group and 25% for low dose group), over the 14-day study period were statistically significant. Time up to the excretion of all ingested markers was significantly shorter in the treatment groups versus placebo. Of the nine functional GI symptoms evaluated, all except diarrhea significantly decreased in frequency in the high dose group, and seven decreased with a low dose. In contrast, only two  (constipation and diarrhea) had reduced frequency in the placebo group. There was no report of adverse reactions occurring in any group. 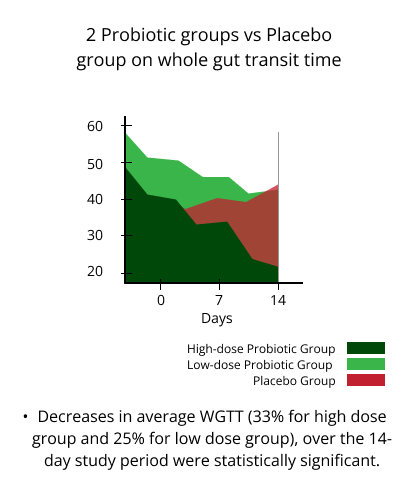 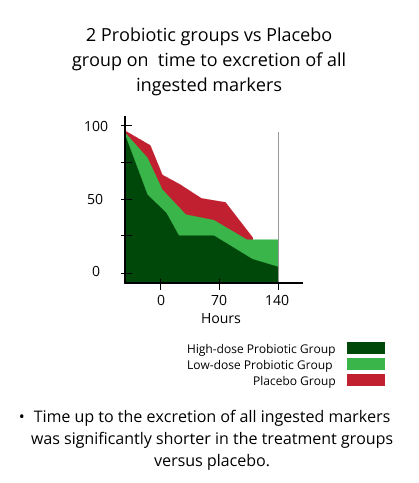 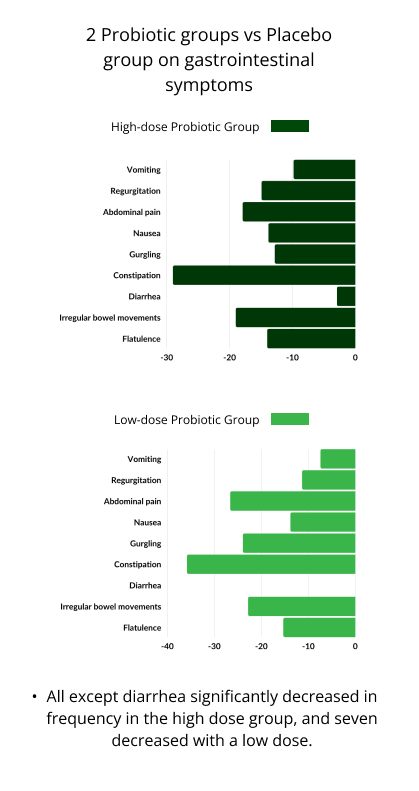 Daily usage of the probiotic B. lactis HN019 seemed safe and well-tolerated. It could decrease WGTT in a dose-dependent manner and reduce the frequency of several functional gastrointestinal symptoms in adults.

Use of Probiotics for Prevention of Radiation-Induced Diarrhea