The life expectancy of people with human immunodeficiency virus (HIV) has dramatically improved with combined antiretroviral therapy (cART). Still, cART-treated patients have a higher mortality and morbidity rate than those of similar age but do not have detectable HIV antibodies involving cardiovascular, liver, and kidney diseases and some cancers. One possible cause is inflammation, as indicated by the heightened level of immune activation that persists in patients on cART, even if the presence of HIV is undetected or under control with medication. Some probable causes of this inflammation are ongoing HIV replication, coinfections, damage in the gastrointestinal (GI) tract, and microbial translocation (like when bacteria from the gut escape into the blood). Some people with HIV are now taking a probiotic supplement to reduce this inflammation. A probiotic is a type of bacteria that helps keep the gut healthy.

In this study conducted for 48 weeks, HIV-infected patients on cART with the undetectable presence of HIV-RNA (ribonucleic acid) in their blood were placed on probiotics supplementation to test the hypothesis that probiotics could reduce immune activation related to microbial translocation.

(Note: RNA is the genetic material that contains information like how the virus reproduces itself.)

The Study Method on Probiotics for HIV Patients on cART

Only the HIV-infected patients were asked to take a daily dietary supplement with probiotics of multiple strains for 48 weeks, twice a day. Their immune activation was evaluated at baseline and 48 weeks after. They filled out a questionnaire at the end of the study to investigate their effects on bowel activity.

The healthy subjects did not consume probiotics and were used as controls of the treatment group to compare immune activation levels.

Inflammation and markers of microbial translocation were significantly reduced in HIV-positive patients with probiotic supplementation. Patients showed a clear and statistically significant reduction in their levels of immune activation on CD4 T-lymphocytes. After supplementation with a probiotic diet, their lipopolysaccharide-binding protein and high-sensitivity C-reactive protein plasma levels, biomarkers for HIV, settled to values comparable to those in the control group. 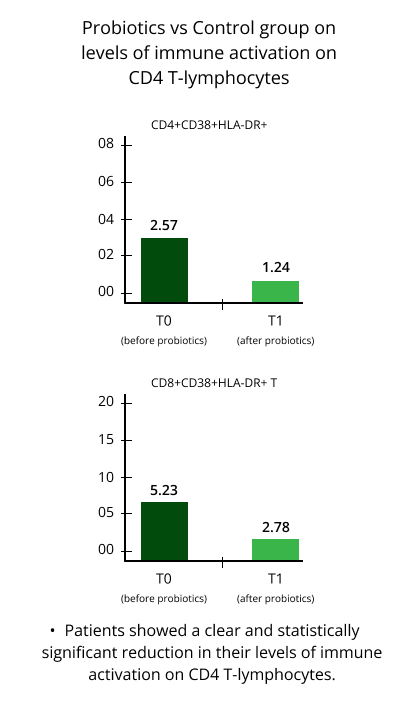 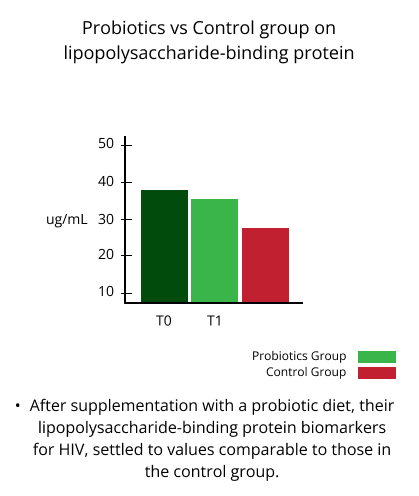 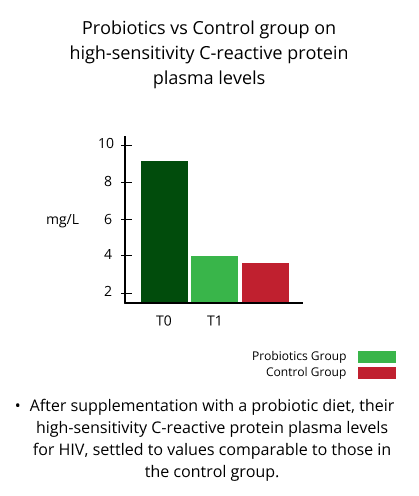 No one disclosed any adverse events with the use of the probiotic supplement.

These findings suggest that taking a probiotic supplement to cART may help improve immune function in the GI tract and reduce inflammation which could ultimately improve the prognosis for people with HIV.